If you’ve hung around fairy tales long enough, you’ve run into the concept of using objects to achieve second sight.

Second sight is the ability to see things that are beyond normal perception such as spirits or energy. Some people are naturally gifted at this and others train themselves to use it. It sits firmly on the line between psychic ability and intuition. 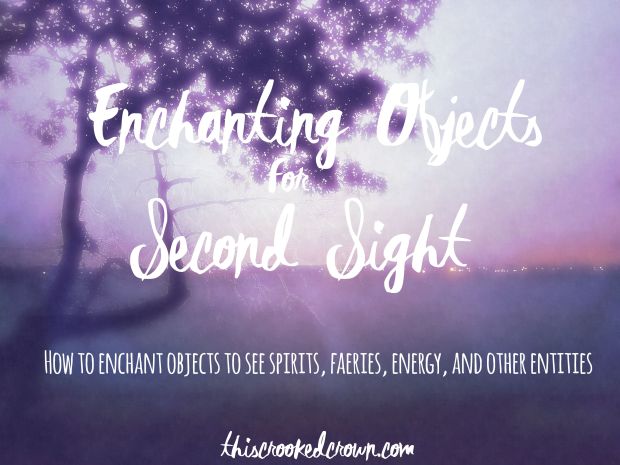 There’s lots of folk information on how to achieve this. Looking through a hagstone or enchanting object are just one of the ways. You can use sandalwood, wisteria, wild thyme, and a number of other herbs to see what’s beyond normal vision. Trance inducers like flying ointments also work in this manner.

Look through a hagstone or doorway is another way to see these things. It’s about threshold crossing which is known to allow one to step between the worlds. (Hence the word “hedge-crossing”). Using this method, you’ll look through a hagstone (a stone with a natural hole in the center but shells with holes in the center work well too) and see what there is to see. Threshold crossing can be any kind of threshold. Stepping between two poles could be a threshold. Crossing between a wall and a hedge could be a threshold. There’s tons of ways to cross like that.

Weirdly, enchanting objects to allow you to see things is common in folk stories and fairy tales but not a common technique shared in modern day. I have no idea why this is.

In order to enchant an object to see what’s beyond normal sight, you’ll first need to pick an object that can be held up to your eye. Eyeglasses and sunglasses are absolutely the easiest and more available for this. A camera could also be used. You may want to pick a necklace you can hold up to your eye. This will be a constant spell so it’ll always be working.

That could actually be a problem. Anyone who has the second sight can tell you that it can be really distracting to see stuff that isn’t there. I’ve braked suddenly while driving thinking I was going to run over a dog that wasn’t there. I nearly jumped out a chair just last night because I thought something ran across the wall directly next to me – but nothing was there. If you’re not use to seeing these beings, you can absolutely end up looking a bit weird. It’s not a consistent thing but at least once a week I end up being startle by some spirit shenanigans that I wasn’t expecting and no one else can see.

You could also pick an object that you wear in order to give you second sight. This gives you more control over the ability. A pair of earrings is a good choice but a necklace or even an article of clothing can be a good choice too.

The technique is very simple but gathering the ingredients can be very complex. It can take up two or three months to set this up if you don’t have any of the materials on hand. For best results, it could take years because you should collect the water and plants on the first of May and then cast the enchantment then as well – which could be difficult if the moon’s not working with you. You could, alternatively also or exchange May Day for October 31st or some other spirit important holiday. I don’t bother because that’s a lot of hurry up and wait for me but to each their own.

First gather water from an old water source – an old river, well, the ocean, etc. I specifically mention old as a pond newly made in a golf course isn’t going to have the same kind of results we want.

Gather the first morning dew for about seven days. You can do this by placing a jar outside overnight and picking it up as the sun rises the next morning. It probably won’t amount to much but that’s OK.

Create full moon water and new moon water by placing jars of water in window sills under the moonlight (or lack of moonlight).

Pour water from each of these sources into a bowl and place any of the following into it: calendula petals, wisteria leaves, powdered sandalwood, mugwort, ash leaves, violets, wild thyme, lavender, or woodworm. Pick as many or as few as you’d like. Let this sit under the full moon for a full night but remove it from sight before the sun rises. You can strain this water now, if you want.

Cleanse the object you intend to enchant. Wash the object with each water source. Make sure that you concentrate on the surfaces of the object. For a pair of glasses, you’ll trace the water along the eyeglass frame then wash the lenses on both sides. Repeat once more with the herb infused water.

Sleep with the object at your side on the night that you wash it. Then it’s ready to use. To use it, concentrate on what’s before you with your mind to see if there’s anything there for you to see. This should allow you to see spirits and energy far more frequently than before. As stated above, you may not physically see things with your eyes all the time but you should be able to sense things and see glimpses more easily.

In addition to the problem mentioned above with reacting to things as if they’re physically in front of you, there’s another thing to be aware of. When spirits begin to notice that you’re able to see them, then they start paying attention to you. This can be fun for some people and terrifying for others. It depends on the beings you end up meeting and how you interact with them. If you’re not thinking about spirit work, then you might want to consider against this entirely. In the end, that’s a choice you’ll have to make.

It can be difficult to see spirits. Sometimes they simply don’t want to be seen or the circumstances aren’t right. Or maybe they don’t even have a physical form for you to see. You may need to just roll with whatever they give you. Good luck!

One thought on “Enchanting Objects for Second Sight”

Follow This Crooked Crown on WordPress.com
Join 10,127 other followers